Production of livestock control software is the need of the country

Managing director of a software specialized company said that sheep & goats were always far away, and the need for industrialization was not felt. He said that the lack of sheep & goat data recording is related to the Iranian history of dealing with these livestock. Sheep & goats have always existed in Iran, but their life was summarized in rangelands. However, new conditions, such as drought, an increase in inputs costs, and the need to make profit, have led to industrialization of sheep & goats keeping method, and industrial methods will now be featured in this activity

In a conversation with ISNA-Isfahan, Mr. Mohammad Vakili talked about the activities of Modiran Tahlilgar Sepahan Company, and said: “The main activity of the company was the production of custom software in different platforms and started with production of specialized software in Windows. Gradually, with the development of the company, other platforms were added to the program. Among the records of this company, we can refer to Petrochemicals Automation Systems of Khuzestan and Isfahan, Electrical Equipment Software of Isfahan Province, Factory’s Manufacturing Sector software and Missing Gases Project. The company started its work in the field of production of specialized software for livestock breeding since 2000, and in the following years it developed and provided the most specialized software in agriculture, dairy cattle and sheep & goat fields.”

He added: “In order to record sheep & goat data, software was produced that covers a variety of breeds, such as Iranian pure breeds, combined breeds (combination of Romanov breed and Iranian breed) and pure foreign breeds (such as Murcia breed). The software can now record 63 breeds of sheep and 57 breeds of goat in separate. By recording the information and training that users receive, they can conduct racial control discussions either in combination or separately. For example, a livestock farm with a variety of livestock creates "a large decision-making matrix (multi-criteria decision making table)" for the livestock farmer to see the profitability and superiority of breeds in their livestock. The design of software is such that users acquire the necessary information without complicated computational operations.”

Referring to Iran's need for developing livestock control software, Managing Director of Modiran Tahlilgar Sepahan stated: “Investors invest in livestock breeding to make profit, and in order to control the indicators of profitability and production, livestock feeding, or personnel performance, they should use the livestock control software. A familiar example is gasoline availability, speed control and even air temperature inside the car as different parameters in a travel. The problem of dairy cows began with the arrival of Holstein cattle breed in 1974, due to the need for milk production. This breed has the highest milk production yield but the water consumption factor of this type of cow including livestock consumptions and environmental consumptions is high. It may not be bad to know that a cow, depending on its age and physical state, consumes 4 to 80 liters of water per day, and if this amount of consumption multiplied by 10 or 100 thousand cows (circulation of cows in a dairy farm), a large volume of water consumption is obtained. The importance of the water shortage problem has led to more control of dairy farms, and it's so important that dairy farmers are obliged to install a water purification system due to environmental pollution.”

Mr. Vakili said that Holstein cows have been imported from foreign countries like the United States, and at the same time their culture has entered to Iran. One of the parts of this culture was the measurement and continuous control of the various parameters of the Holstein cows. And in Iran, Holstein cattle information has been recorded in industrial dairy farms since 1991.

He added: “I believe there's always been a length of information about sheep & goat, but no diameter of information existed. It means that we have a history of sheep & goat in Iran, but we do not have information records about these types of livestock. Data was not recorded by 2014, and sheep & goat information was limitedly available only in the livestock research centers. With the arrival of sheep & goat from Spain by the Mostazafan Foundation of Islamic Revolution, Modiran Tahlilgar Sepahan Company as the contractor of this foundation, developed sheep & goat herd management software, and later, with culturalizing in this field, other large herdsmen joined the recording of information. The project was widely welcomed by governmental organizations such as the Martyrs Foundation and many private companies in Kerman province (e.g. Karami Nejad) and Golestan province (e.g. Pade). Finally, a rich data set of livestock was created and sent to be used by the Animal Breeding Center (ABC) of Iran. ”

Managing director of Modiran Tahlilgar Sepahan Company explained about the difference of the developed software by their company with similar internal and foreign samples and said: Countries that are advanced in sheep & goat breeding field are also interested in collecting information about livestock and the accuracy of data. This software has similar foreign samples, but we tried to be different than foreign ones. To understand the difference, we must first have some explanations about the other countries' methods. The variety of foreign software is high and therefore the competition market is high. Vendors use two tricks to control the market. First, producers do not provide methods for obtaining index numbers to the users, and the livestock farmers don’t know how to calculate indicators by the software, and only the consumer is the index number. For example, users' information is limited to degree of livestock twinning in their herd. Secondly, for each declared indicator, a separate charge is taken from the consumer. For example, the livestock farmer must pay 50 cents per livestock to be informed about the current status of the herd and pay 50 cents separately to predict the future status.

Mr. Vakili said that because our company had experience of dairy cows before the arrival of sheep & goats, and various tools have been produced in this field, the software didn’t have any internal similar sample, and only several studies have to be conducted to produce sheep & goat software. Therefore, a meeting was held in the field of industrial livestock (sheep & goats) in terms of executive and scientific with the presence of 20 elite in livestock industry in 2015 and resulted in the production of sheep & goat software using their knowledge.

Modiran Company is interested in establishing free systems that can be used to transfer experience, and from the perspective of the company, this approach presents ideas and promotes rapid user growth. To achieve this goal, and for the professional training of users, the company has already held 20 five-day training courses, and 600 people from all over the country have been enrolled in these courses, and 450 of them have been graduated. This has led to the rapid development of knowledge in this field and continuous publishing.

Another difference of the software with its foreign counterparts is that the company does not charge for new items, but provides livestock farmers with free services. If the Iranian livestock farmer wants to use the same foreign software, he must pay a high fee for the same services in foreign software. One of the honors of this company is that software pricing is such that the consumer can buy a good quality product at a low cost.
About the discussion of livestock sperm, he emphasized: “We set up an online sperm bank for quick and simple access to the sperm database, and through this, livestock breeders can use a single click to track the pedigree after using the sperm and simply manage the genetic modification in their herd.”

Mr. Vakili continued: “Companies which are cooperating with our company in Iran and Isfahan province include dairy farms of Foode, Fazil, Foka and Ghiam affiliated to the Mostazafan Foundation of Islamic Revolution, Social Security Organization of Isfahan Province, Vahdat Cooperative Company of Isfahan, Ahrar Sepahan, Martyr Foundation, the Islamic Revolutionary Guard Corps, the Execution Committee of Imam Khomeini's Order (EIKO), the Imam Khomeini Relief Foundation, the Social Security Organization, and more than 1000 other livestock farms all over the country.”

Managing director of Modiran Tahlilgar Sepahan Company explained about other products of the company and said: “According to the development of software for animal husbandry, agriculture, extensive scope, country needs, and various specialized software topics, the company tries to provide designable software for the customers. IRMA software is high-tech software that employs user's data to design new software. By installing IRMA software, it connects to the mobile network of the company to design the new software in order to implement heavy projects and add different parts to it. Also, due to the variety of opinions, practices and products in the agricultural field, the calculation of the actual cost has become complicated, but now with the support of qualified financial managers in Pars Agricultural and Animal Husbandry Holding Co., the next step of the company has started to calculate the actual price of agricultural products, and we hope we can also make that happen. It should be noted that since 2011, dairy cattle products actual cost software has been used in many livestock farms in the country, which determines many of the policies in milk domain or even meat domain in the country.”

Mr. Vakili said: “Among other specialized software produced by the company, we can refer to the actual cost software and the livestock nutrition software. We have recently negotiated with a company in Tehran for connecting the comprehensive livestock feed data recording system to the hardware of the company. And in the case of the specialized software of the milkers, we are negotiating with another manufacturer of these devices.” 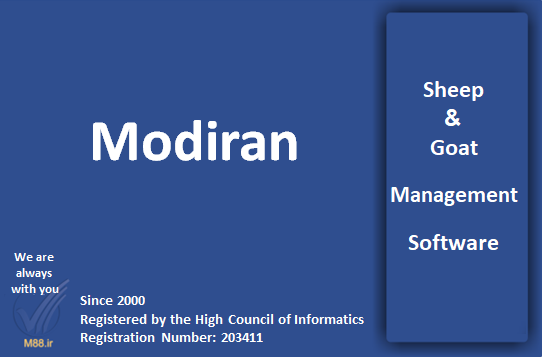