For the first time in the country; data of sheep & goat milk was recorded and plotted.
According to the Science and Technology News Agency of Isfahan, researchers of Modiran Tahlilgar Sepahan Company, succeeded to record sheep & goat milk data and plot it, when this success happened for the first time in the Iran.
In an interview with the reporter of the news agency, managing director of the company stated that the Agriculture and Animal Husbandry sector is the basis of passive defense of foodstuffs and one of the factors affecting the self-sufficiency of a nation and has been considered as an important sector from the distant past. He also stated that, despite the fact that at the global level, Agriculture and Animal Husbandry has moved rapidly towards modernization, in our country this sector has followed its traditional trend

Mr. Vakili said that, breeding the livestock such as sheep & goat in the country has a long history and when animal breeders in southern half of the country have focused on the goats, breeders in northern part of the country have focused on sheep. He stated that although preserving the capital, creating herds, and using the milk and its products had mainly been of great interest from the past, milk data recording has never happened.
He continued: “There have been native breeds in the country but the motivation to improve production of meat, milk and its products had caused to import races like Murcia goats from countries like Spain. Occasionally, in terms of scientific or non-scientific, these native or non-native livestock combined together and created a new type that had different characteristics.”

Mr. Vakili noted that, for example, two different breeds would cross in terms of coexistence, and the new breed would have different milk composition, meat flavor and growth rate. He also said: "These are the information that was needed to be recorded and collected during the past periods.

He argued that we might say that the availability of such information for the country has a strategic value, and stated: "In recent years, the country faced with droughts and lack of water resources. Following this, about six years ago, it was argued that to breed livestock and produce milk, the focusing on livestock should go from dairy cattle to the sheep & goat.

Mr. Vakili said that there was a problem that we had no available documentary data that could determine the economic efficiency of each breed. If we want to work on meat, which breed has the highest rate of fattening, or which breed has prolificacy and high reproduction rate, and if you want to work on milk, which breed has a higher milk yield and which milk has the best properties?
He continued: The researchers of Modiran Tahlilgar Sepahan Company, by observing these problems and dealing with them, placed their mission in collecting, storing and professional and scientific analyzing of data about various types of native and non-native sheep & goats, and the first discussion was that in the first phase, they started collecting and recording data on industrial livestock farms and then directing traditional livestock farms to industrialization.

"But industrialization means organizing sheep & goat biography in such a way that we can make the most profit," said Mr. Vakili. A biography that was unclear and there was no consensus on it, it was studied, but different races were never seriously analyzed.

Managing director of Modiran Tahlilgar Sepahan Company said: "We set our mission to collect raw data for two livestock products, namely reproduction and milk production, and then we put the livestock biography data into the software.
He stated that we started collecting information with the help of the Mostazafan Foundation with a herd of Murcia breed (originated from Spain) in one of the most deprived areas of the country, namely, Qaleh Ganaj, located in Kerman, and then he said: "The goal was that all the races in the country should be studied to choose a race that is profitable, therefore, this herd that began to be used industrially, could be a good example and guide to other herds".

Pointing to the fact that most experts choose to select breeds based on the content of the books, Mr. Vakili added: "No one thought that a race in its hometown has a different functionality than in somewhere else, and so the races which have been imported to Iran would have different functionalities. In order to be profitable with our imports, we need to continuously monitor and control the performance of herds, and the only way to do this is to collect and record data continuously.
He also said: "You imagine that when a livestock enters the country, in the first generation, it has racial properties such as (prolificacy, milk parameters like fat and protein, growth rate, etc.), with maximum capacity, but when this generation cross breeds with its own race or other races, subsequent generations may not have the properties of the original livestock, but also because of climatic reasons or racial combinations, its racial properties are reduced or lost altogether and perhaps even more than that happens. Genes that are inactive in the hometown are then activated by climate change, and we even can’t guess what effect these genes will have on our investment. So we have to continually monitor the data to determine if the livestock is the same as the imported animal, and which side are the racial properties moving toward if they have changed? Making profit or loss.

Mr. Vakili stated: "All of this indicates the need for data recording, which had never happened in Iranian history.
We began to record the data from the goat animals of Karami-Nezhad private herd in Kerman since 2014, and then we continued in Qaleh Ganj, Pade Golestan and other livestock farms in Iran. In the process, we entered into negotiations with the Animal Science Research Institute of IRAN (ASRI), and we showed the necessity of recording information at various seminars, which, thankfully, was welcomed by all the centers very well.

Fortunately, in addition to these institutions, other institutions such as the Zanjan Corps, the Martyrs Foundation, the Barakat Foundation of Execution Committee of Imam Khomeini's Order (EIKO) and other centers also joined this information recording movement and so we could provide a rich set of information on livestock (e.g., sheep & goat) for our country.

Pointing out that collecting information in various fields required the use of advanced and expensive servers, Mr. Vakili stated: "We employed servers with state-of-the-art technology and we tried to provide scientific link for the universities or reputable scientific centers to research through Modiran server."
He said that the project did not just include data recording, but data controlling and data analysis were also considered, and appropriate tools for reporting and data analysis in the software were prepared.
Announcing this news that the country's livestock information is being recorded for the first time in a seamless manner, Mr. Vakili said that the company's researchers designed the sheep and goat management software, and after four years from the first presentation of the software in Iran, they became able to record the milk data and plot milk record of different livestock breeds.

Mr. Vakili said that it abetted us, for the first time, to have a diameter of the information (i.e., record of livestock different characteristics vs. time) instead of having just the length of the information, and now 90% of the field information of sheep & goats in Iran is recorded in our management software and presented to other decision-making centers, such as the Animal Breeding Center (ABC) of Iran.
"In the future, we hope to be able to measure the amount of fat and protein in different breeds and also determine which breeds have higher yields of reproduction and prolificacy and should be prioritized," he said.

At the end, he added: "The work experience of the researchers of this company dates back over two decades and the development of the necessary scientific software in the country has always been considered at the top of the company’s plans. One of the company's previous software, which is now used by most large corporations, is the Dairy Cow's Management Software, which is used in three main sectors of herd management, nutrition management and actual cost management.

The next software of this company, which has been prepared with years of comprehensive scientific and empirical studies and researches, is agriculture software in four sectors including: agriculture, garden, aquatic animals and greenhouse. Its experimental use is started in two phases of management and actual cost.
To produce agriculture software and due to its breadth and complexity, we first developed the software called IRMA. IRMA has the power to produce other software and is also one of the "Hi-Tech" software. And then, with the help of IRMA, we produced agriculture software. We also prepared SAM and ISAM software that work on Android for the needs of the community, and for dynamic development of the software, we also provided web-based online panels to provide a comprehensive collection for servicing to the Animal husbandry and Agriculture industry in the country. 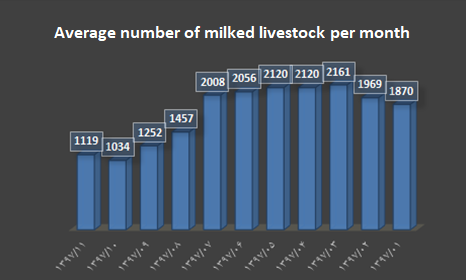